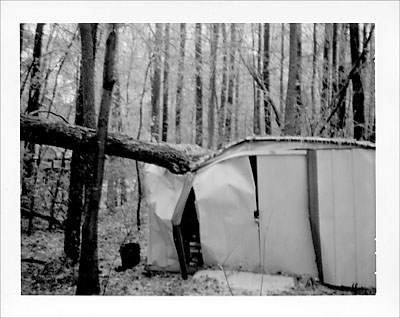 The beauty of nature. The power of gravity.

If a tree falls in the forest, and there’s no shed for it to hit, is it covered by homeowner’s insurance? read on…

A picture is worth a thousand words. Somebody dead and famous said that. He was probably killed by a falling tree for being so damned witty.

All that being said, here is my 5,000 word (give or take) essay on the recent ice storms in North Carolina. Bear in mind that these photos were taken by a very old polaroid Land Camera with questionable film in temperatures well below the recommended operating environment for black and white developing. That, and the sun was just coming up.

Hard to make out in this fuzzy, poorly lit shot, but that is a large pine bough, dangling from the power line that leads to my house. During a previous hurricane, it was ripped down by a similar branch, and the new line was installed with a reinforcing braided steel wire along its length, preventing outages due to falling branches. This came in handy in a storm shortly after I moved into my house, in which the stump of a dead tree fell toward the house, hit the power line, and rolled off it, into the back yard – instead of into the master bedroom. This is all well and good, but doesn’t help much if the transformer across the street happens to blow up…

I woke up thursday morning just in time to see this one fall. It went over slowly, bringing along a handful of branches from neighboring trees, and came to rest, gently, intersecting my storage shed.

The damage to the shed is pretty much complete, though the padlock keeping the doors closed (not that anyone is going to steal my lawnmower, but safety first!) is still intact. Also, the roof, though taco-shaped, seems to be effectively keeping rain out, so the items in the shed are safe for now.

This is where I try to get artistic and capture the beauty of nature. This is made all the more difficult when one’s hands are shivering in the cold.

This is my cable. Time Warner, in their infinite wisdom, ran their cable from the same pole as the power line comes in, and attached it to the same point on the side of the house as the power line. Did they attach it to the reinforcing steel wire? No. The other end of this cable was in a pile, a foot of copper coax exposed where it had been ripped out of its junction box.

Me? I survived just fine. I helped my neighbors and some folks I didn’t know to get their cars out of blocked driveways to be helpful, pulled downed trees and limbs out of the road to keep busy, and slept with four blankets and two cats at night to keep warm.