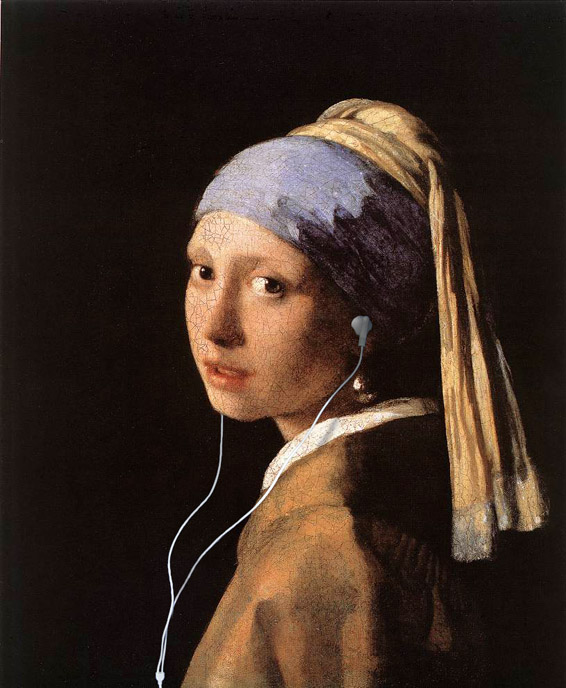 Girl with Pearl Earbuds (with apologies to Vermeer) by Option8.

Girl With Pearl Earbuds by Charles Mangin is licensed under a Creative Commons Attribution-ShareAlike 3.0 Unported License. 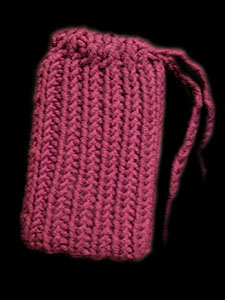 why… what’s in that little knit cozy?

yep. i knit an ipod cozy. email me if you want the pattern :)

[update]
i’ve never actually written a pattern before. i’m even bad at following them, as i tend to try and experiment – sometimes with unpleasant results. anyhoo, for everyone that has requested it, here’s what i’ve got. it may be hard to follow, incomplete or totally inaccurate, but then, that’s true of most everything i write.

if you’re more of a “pro” knitter, and feel up to the task, feel free to adapt or rewrite these instructions in a proper format.

begin by casting on 9, 11, or 13 stitches onto a double-ended needle. the number depends on the size of your needles (i use #7 / 4.5mm), the type of yarn (i’m using a “worsted” weight yarn this time), and whether you’re planning on using the resulting cozy on an ipod, ipod mini, cel phone, or other electronic gadget of similar size. full-sized ipods tend to fit the 11- or 13-stitch cozy, the mini is more of a 9-stitcher. in any case, the result should be plenty stretchy, so don’t be alarmed by a slightly small diameter.

beginning and ending with perls, alternate knit and perl for one row.

with three more double-pointed needles, complete the circle. cast on 4, then 9 (or 11, or 13), then another 4. you should now have a wide rectangle.

join the circle and, following your previous row, beginning and ending with perls, alternate knit and perl for the long sides.

for the short sides, perl one, knit two, then perl one.

in this manner, continue to form the cozy, until you’ve reached the desired length.

bind off one of the short sides. continue around the three remaining sides, perl every stitch. turn around and knit a row. continue this – a row of perls, a row of knits – for six more rows.

finish up by sewing the resulting flap at the top such that you can pass a string or braided yarn through the hole and cinch up the opening at the top. i’m not describing this very well, but look at the photos and you should see what i did.

sew the bottom flap so you’ve got a closed off “sock” to slip your ipod into, then turn inside-out to hide the seams.

due to the continual popularity of this post from my old site, i’ve decided to repost it in the new WordPress site, so people can actually comment on it

comments and notes by Linus Torvalds included in the Linux Kernel
(version 0.01)

When looking through the kernel source, out of curiosity and in an effort to glimpse a piece of the history of this revolutionary operating system, as well as the personality behind it, I found myself fascinated by the irreverent comments and side notes that the author included with the code.

I felt that the comments in the code, the direct communication between the programmer and his peers, the kernel’s earliest users, was worthy of archiving as much as the operational code. Possibly moreso.

The following comments are contained in the source code of the original Linux kernel, version 0.01, from August 1991, by Linus Torvalds. Many of these survive in the latest developmental kernel, alongside those of the many open source contributors that have, since 1991, joined the, now monumental, effort.

if you laugh at this, you’re evil.

last night it rained and i couldn’t sleep.

the gentle hush of rain and the patter of drops on the tin roof of my storage shed would normally put me to sleep in short order. but last night, i was, for some reason, too restless to sleep.

then it started again. the dripping. the. steady. plop. drop. drip. thunk. of water, not in a random stream of droplets as on the roof or window, but the metronome of dripping water i became so familiar with in an apartment with a leaky faucet a few years back.

my first reaction upon hearing this sound, in the late hours of one night a few weeks ago, was that my brand new roof had already sprung a leak and, because of my expert triangulation of the sound’s location, was leaking water into the space behind the drywall.

fetching a flashlight (and this will come back into the story later) i hurried to the attic and attempted to catch the dripping in the act. after an exhaustive search, i determined that the source of the sound was not, in fact, inside the house at all.

apparently the new roofline had some new drop accumulation points along the edge of the roof that overhangs the wall just outside my bedroom, and one of these was dripping onto the electrical box attached to that wall, hence the hollow thunk when the drips hit in steady succession. or the cable box. or the phone box.

that side of the house is festooned with electrical protuberances, each of which could have been ground zero for plunging droplets.

for a while, i slept soundly, secure in the knowledge that the drips which would occasionally wake me were coming from outside, and were not the harbinger of rotted and crumbling drywall, mold and water damage.

restless and already perturbed by my inability to sleep, i determined to go outside and put an end to the dripping – or at least the sound – once and for all. i would find where the drops were hitting and put something, pine straw or leaves, on top to deaden the impact, and hence the sound.

but i’d need some light. so i sought out that same flashlight from the attic expedition. it didn’t work.

neither did my other flashlight – a 30+ year-old boy scout model that takes D cell batteries. i swapped out the batteries, as for some bizarre reason i was able to locate spare Ds before i could find the AAs the other light took. still no good.

oh well, the bulb’s gone in that one. here’s some AAs for the other… crap.

the bulb had blown in both of them, and i had no replacement bulbs. in the end, i went outside with a decorative candle, sheltered under an umbrella, to spot the dripping culprit and put a handful of wet pine straw on it. it was the phone box.

my point, and why i ended up cursing my way back to bed, was that, surrounded by an endless wasteland of computer and other electronic components, technology in all its splendor, i had no way to make light in the darkness outside my door. i can turn on my tv from the other room, or set up a show to record from my computer at work, even over the phone, but i couldn’t fulfill the simplest, stone age requirement of lighting my way in the darkness. at least not without resorting to the stone age implement of fire to do it.

in the end, exhausted and lulled to a deep calm by the remaining comforting sounds of falling water, finally, i slept.

she’s dead. can we stop talking about her now?

enterprise sucks. i will not be sad to see it go.

yeah. i had high hopes for a prequel series when the buzz started up about it. but as soon as the first episode started up and that… song… oozed out of the speakers… sweet mother of crap, that was awful. it killed the mood, shat on the entire majesty and nobility of the journey into the unknown that makes trek, well Trek.

even TNG, on its worst wesley crusherest of days, still kept the spirit alive, though it was sitting in a corner, crying a little. a big part of it was characters like picard, but, as with a lot of the best movies and series, one of the characters was the music. in my mind, enterprise was DOA in that department.

well, that and the decision to make enterprise’s pre-TOS technology too far advanced. where are the knobs and switches? analog, kitschy interfaces would have made things a little humorous, but the series took itself way too seriously anyway. that and the transporter. i wanted so badly for them to not have that plotcrutch to lean on. to have to write themselves out of a wet paper bag, without the deus ex machina of instant matter transmission.

and time travel. god, how readily that’s trotted out when the soup gets thin. it’s all somehow worse than the dark days of deus ex wesley. at least those episodes can be explained by a writers’ strike. or so i’d like to believe.

paramount should have hired the writing team from firefly as soon as fox let them out of their contract, killing off the last great hope of many scifi tv fans. firefly will be missed.

in the long run, though, enterprise will not be mourned, at least not any more than ensign whatshisname that got killed that time. the one in the red shirt that transported down to that planet…

highlights from south by southwest:

i saw a hobbit talking on his cel phone.

Al Franken signed my ipod, and didn’t say anything derogatory about David Sedaris when he saw “Dress Your Family in Corduroy and Denim” on the screen below “Lies and the Lying Liars Who Tell Them” – and didn’t make fun of me at all, despite the fact that i’m a drooling fanboy

Ana Marie Cox made a comment about my having big hands, and worked the phrase “ass fucking” into her answer to my question about the definition of journalism.

the guys from home star runner are almost as funny in person as they are when animated.

i managed to ask matt mullenweg about the possibility of getting hit by a bus without raising any suspicions.

I was interviewed for a documentary about second life and may soon burst into flames and collapse in upon my own force of geek gravity.